There is nothing quite like the desert at dawn. Getting out of bed, fed, dressed, and out the door to ride is the proverbial race before the race. Even though Tucson’s midday temperatures can be unrelenting, the early mornings are wondrous. There is something very satisfying about being on the bike before the sun peeks over the mountains. I am fortunate that I live about one-and-a-half miles from The Chuck Huckelberry Loop, named after the Pima County Administrator that oversaw its construction. This asphalt network follows along the banks of the city’s waterways, circumnavigating busy Tucson streets for 131 miles, and is affectionately referred to as The Loop by locals. 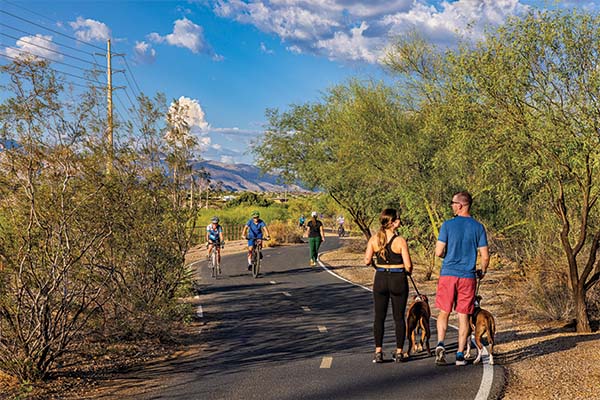 The Anatomy of The Loop

When I say waterways, I mean that metaphorically. These rivers only flow during abundant monsoon deluges now. Their banks are the bedrock for the asphalt that encompasses The Loop. The main or “inner” route of The Loop follows the Rillito River Path on the north side, the Pantano River Path and Harrison Greenway on the east side, the Julian Wash Greenway on the south side, and the Santa Cruz River Path on the east side. Along certain sections, mainly the Santa Cruz and the Rillito, there is a path on both sides of the river bank. But be mindful as you’ll need to cross over at certain locations.

The Loop itself is a figurative loop; it’s more of a rhombus or trapezoid. The complete inner route is 54 flattish miles and can be ridden clockwise or counterclockwise. If ridden clockwise, you’re looking at about 700 feet of elevation gain. If ridden counter-clockwise, it’s around 900 feet of elevation. Each direction has a slightly different vibe predicated primarily on how and when you want to finish the uphill sections and, vis-á-vis, your starting point.

What the Tucson area lacks in a cross-town freeway, it makes up for with The Loop. The vast majority of its miles are tarmac uninterrupted by car traffic or stop lights. There are a few instances of road crossings and venturing out onto surface streets. However, you’ll be able to maintain a steady clip as you’ll fly under most major roads for the lion’s share of the route. Signage, directions, and mileage are abundant, easily facilitating orientation, staying on course, and managing time constraints.

There are vestigial sections of The Loop that extend farther north and south, primarily along the Santa Cruz River Park. The most significant is the Cañada Del Oro River Park (CDO). The CDO peels off the inner loop at the northwest corner and proceeds northeast along the western flank of the Santa Catalina Mountains. This section heads uphill (+500 feet; .8% grade) for 11 miles and affords stunning views of the rock formations that comprise the northern slopes of the Santa Catalina Mountains.

My favorite route starts at a popular midtown location at Brandi Fenton Memorial Park, located at the intersection of Alvernon Road and Dodge Boulevard. Riding clockwise, you’ll cycle upward for the first 18 miles along the Rillito River Park, Pantano River Park, and Harrison Greenway (+510 feet of elevation; +.6% grade). After that, you are treated to a downward slope for the next 26 miles along the Julian Wash Greenway and Santa Cruz River Park (-680 feet of elevation; -.5% grade). The route concludes on 10 miles of false-flat Rillito River Park back to Brandi Fenton Memorial Park. The benefit of rolling clockwise is that most of the uphill work is completed early, and numerous corners and chicanes exist on the Julian Wash Greenway.

Rolling counterclockwise, you’ll go downhill for the first 10 miles on the Rillito River Park before hitting the 26-mile uphill section from the Santa Cruz River Park and Julian Wash Greenway to the Harrison Greenway on the southeast side. After that, you are treated to a 17-mile downhill dash along the Harrison Greenway, Pantano River, and Rillito River back to Brandi Fenton Memorial Park. The benefit of this direction is that the last 17 miles face the Santa Catalina Mountains, the crown jewel of natural beauty in Tucson.

Herein lies the charm and utility of The Loop: its predictability. The Loop can be whatever ride you want or need it to be, especially if you are riding solo.

The Loop is a multi-use path. As such, the list of “pathletes” is lengthy. There will be parents teaching their kids how to ride. Kids showing their parents how to ride. Weekend warriors and cycling’s crème de la crème (especially in the winter) training for their next big race. Human-powered machines of all manner and configurations. Hand-cyclists, recumbents, and the occasional aerodynamic-research- project-inspired fully enclosed bicycle. You’ll witness bipedal modality of all sorts, from your leisurely morning dog-walker all the way up to various luminaries of the endurance pantheon. This variety makes the people-watching aspect of The Loop second-to-none.

You will cross paths with people on all modes of self-propelled transportation at varying speeds and skill levels. Some are commuting to work, some are chasing fitness, and some are exorcizing the day’s anxieties. I feel that, especially if I am the more experienced cyclist, it is my responsibility to ride cautiously and predictably, especially in the more congested areas.

When you’re using The Loop, be communicative. Throw a smile, a wave, a couple dings of your bell, or a friendly “coming up on your left” when encountering others. A little extra courtesy can go miles (pun fully intended).

The other benefit of The Loop’s utility is getting you to and from other rides. Have an itch to tackle the world-class climb that is Mt. Lemmon (25 miles; 5,300 ft. of climbing)? Get off The Loop at the Tanque Verde bridge and head east.

Robert “Robb” Gibson has been riding primarily mountain bikes with some road riding since 1992. What began as a sport he tried to best his friends at became a lifelong passion he has since taught his child (on The Loop). Robb hates getting up early but loves early morning rides. His favorite road ride is Mt. Lemmon, and his preferred mountain bike ride is La Milagrosa.