By day, Jerry Rockwell is a lab technician performing quality control and destructive testing for roof coatings, but his nights and weekends are dedicated to his passion—sculpting. Growing up in Tucson, he tried the artform from time to time as a way to give gifts to his family. His sister cherished his creations, so when one broke, she bought him the soapstone so he’d make her a new piece.

“I never pursued sculpting until 2017 when my sister commissioned me to replace a piece I had made for her,” says Rockwell. “I had not touched a chisel in years, but I picked it back up and created Kelpe. My wife and family insisted I continue.” 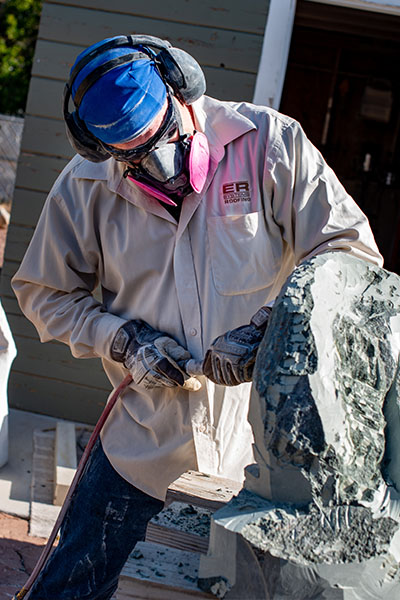 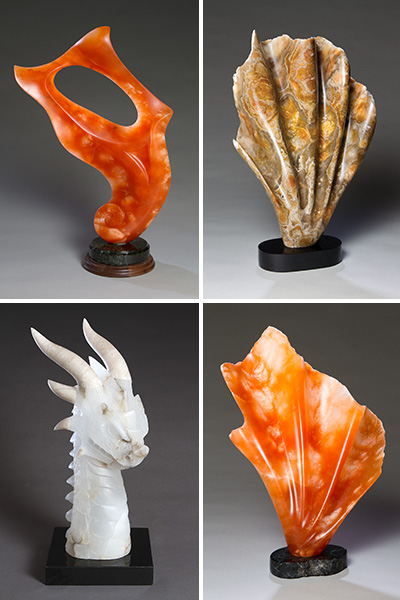 Since that fateful request, Rockwell has been sculpting out of his backyard studio. His favorite type of work is abstract, where he takes a stone and finds the image within it before bringing it to life.

“It’s like when you lay in a field and stare into the sky and see shapes in the clouds. Sometimes all of the creative work is already done for me. I follow the shape of the stone, removing the excess until the final artwork is revealed,” says Rockwell. “The designs are often a surprise to me. Sometimes I will stare at a stone for days. My wife sometimes joked with me, asking if I was staring at a rock. I’d say, ‘Yes. Yes, I am!’”

He can sculpt just about any stone, including marble, calcite, chlorite, and some onyx, but his favorite material is alabaster. He notes it’s softer than marble and available in various colors and visual textures. Some are even translucent, allowing light to pass through them, so the stone glows.

“Alabaster is not an outdoor stone because the color will fade. But putting them on display inside where they can get light once a day is just amazing,” he says. “I am still developing my style. As an artist, I think that is a constant. Right now, I like to do pieces that portray motion. I have been working on several designs, which show motion and seem organic, but still maintain an edge that shows the stone as it was before sculpting it.”

You can find his popular motion designs and the occasional dragon at Arizona art galleries, including Toscana Gallery, Oro Valley; On the Edge Contemporary Gallery, Tubac; and Anticus Gallery, Scottsdale. He also has his work on display in Tulsa, OK.