Dale Ott knows the alcohol and spirits business. This fifth-generation Arizonan grew up on a little farm in Coolidge, Arizona, before arriving in Tucson for college. She left and came back five times — the sixth time, she thought she might as well stay. Eventually, she married Steven Ott, a fifth-generation Tucsonan, and the two embarked on careers in the alcohol industry that led them to wine importing. The pair are opening Nossa Imports this spring, an import and distribution company that gives a platform to underrepresented wine regions of the world. They often travel to Mexico and the Iberian Peninsula to meet with small vineyards to help them break into the tricky US market while simultaneously bringing what has been an inaccessible luxury item to everyone.

“Why do we need inaccessible things? We need things that bring people together, especially now, and landscape and food and beverages do that. It’s the things that make us all the same,” said Ott.

While these two are often off traveling the world, Tucson is always where they return, a place filled with culture. She points to South Tucson with its different municipality, vibrant style, and the native reservations, most notable the Tohono O’odham Nation, as examples.

“The coolest thing about Tucson is that we are such a multicultural place. The Borderlands is one of the most diverse regions with our mix of cultures across the region and all the history that goes along with it,” said Ott. 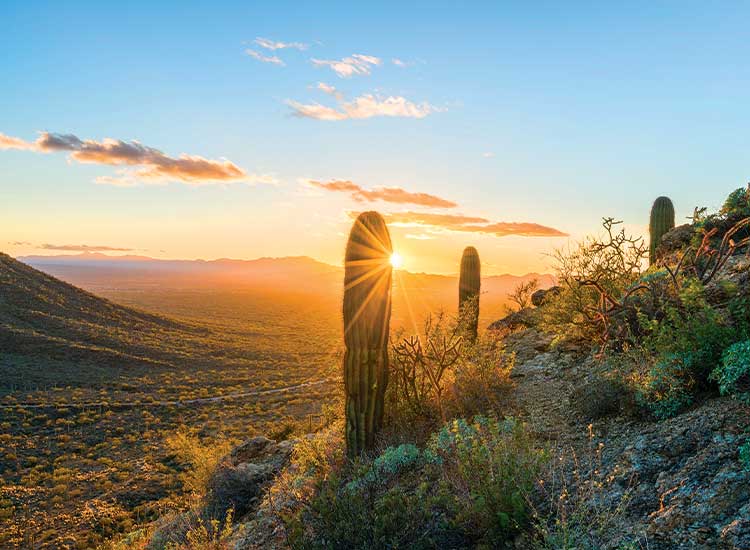 Ott says unique geographical spots around town are what tie cultures to its community. Gates Pass is one of her most special places. According to Ott, the land was part of Mexico, and now it’s in the US.

“Going up to Gates Pass, there’s a little rock house that’s kind of up on top. It’s a two-second hike up from the parking lot and has the best view of the sunset in town. When we’ve accomplished something big, we’ll take a bottle of champagne and go watch the sunset with our dog,” said Ott.

Another place that has been part of Mexico is the Mission San Xavier del Bac, a historic Spanish Catholic mission located about 10 miles south of downtown Tucson, on the Tohono O’odham Nation San Xavier Indian Reservation. And, of course, there are hiking trails with three noted favorites. The Finger Rock Trail leads to Finger Rock, a 100-foot-high formation that marks Finger Rock Canyon located in the Santa Catalinas. Seven Falls is a trail found in Sabino Canyon that boasts seven waterfalls, and 25 miles south of Tucson is Madera Canyon Nature Trail that features beautiful wildflowers.

When it comes to food, Ott has praise for two of the most talented chefs in her eyes, both born and raised in the Old Pueblo. Mike Hultquist Jr., the fourth generation to run the family-owned-and-operated El Torero with his dad, Mike Hultquist Sr., commands the kitchen inside the pink restaurant that opened in 1956. He blends old school and new school that Ott says is beautifully unified.

The other notable chef is John Martinez of Tito and Pep, a contemporary neighborhood bistro that encompasses the spirit of Tucson and the Southwest. After starting restaurants in New York and along the East Coast, Ott says that he returned with a completely different level of understanding internationality and hospitality that he brought back to his hometown of Tucson.

Of course, Ott has a bevy of places to get a cool drink across town. She loves dive bars, including Danny’s Baboquivari and The Shelter in midtown. On the west side is The Wagon Wheel and Nevada Smiths Steakhouse Saloon on Miracle Mile, where you can toss peanut shells over your shoulder onto the sawdust-covered floor. Downtown, her favorite is one of the oldest bars in Tucson, Arizona, The Buffet.

“This is really where my husband and I courted each other. We both worked till four in the morning, and then we would find a place for breakfast before going to The Buffet at 6 a.m. for a hot dog and to say hi to all the rest of the hospitality community with the same schedule. Talk about part of the community. It’s a place where everybody is the same, you know,” said Ott.