You can't miss Gigi Chanteuse. This petite  performer packs a vocal and visual punch as the front-woman for Gigi and The Glow. Arizona’s favorite dance music cover band draws a crowd at entertainment venues around Tucson, performing happy, upbeat, nostalgic music from the 50s to today’s hits, with cumbia and Latin songs sprinkled into each set.

Her passion for performing was sparked by her grandma, who would make her perform for friends. At five, she started dance classes, and at 15, her professional career began. She formed Gigi and The Glow with her husband Daniel, a seasoned drummer from Los Angeles, CA, when the pair recognized a need for high-energy dance music in Tucson. The couple also works with various musicians to perform other musical styles, including jazz.

She moved from California to Tucson in 1993, raising four children and welcoming a grandson in the Old Pueblo. While her band takes her to gigs in California and Texas and a beach home to Mexico, she’ll always take the five-hour trek to return to Tucson. 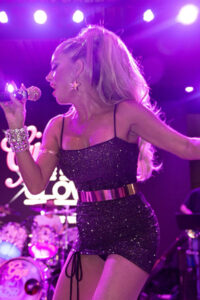 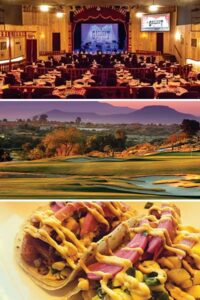 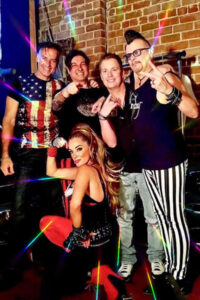 It should come as no surprise that a performer would seek out local theater. One of her favorites is The Gaslight Music Hall of Oro Valley, where audiences enjoy concerts and revues spanning every musical genre. Guests are treated to the finest family entertainment in Arizona, and a full menu with pizza, wings, sandwiches, salads, and a wide variety of beverages, including cocktails and milkshakes.

Outdoor adventures take Gigi to Sabino Canyon and all the hiking trails found in Southern Arizona. She also enjoys the Omni Tucson National Resort golf course that hosts PGA tournaments and The Westin La Paloma Resort golf courses, noting they’re not only a great place to play golf but also for walking.

Plus, Tucson is known for bike riding. It is the home to one of the premier bicycling events in the country—El Tour de Tucson—that has been part of the community for nearly four decades and welcomes more than 7,000 cyclists annually.

“We performed for them, and it was so much fun. El Tour de Tucson is a tradition here, and we were very honored to do that,” says Gigi.

“Riding those bike trails, you’ll see so much beauty. The Tucson desert has so much breathtaking scenery, especially during monsoon season when everything turns green and pops with color. It’s a work of art, like tapestries that unfold overnight,” says Gigi.

Finally, she can’t say enough about the sunrises and the sunsets. When you’re in Tucson, look to the sky for a real treat.

“I grew up in California, and I love California, but there’s nothing like Tucson. The weather here is amazing, and the sunsets are the most beautiful you’ll ever see,” she says.

“Where can I begin? Everything is good here!” says Gigi. “I’m not a big eater, and I love that in the last five years, Tucson now has more and more vegan venues and menus.”

Of course, St. Philips Plaza is high on her list; Gigi and The Glow regularly perform on the patio surrounded by Proof Artisanal Pizza & Pasta, Reforma Modern Mexican, and Union Public House. Guests can choose to dine on handcrafted artisanal pizza and house-made pasta, authentic Mexican food with a modern and playful twist on fresh local ingredients, and made-from-scratch American fare using local and sustainable ingredients. Each restaurant serves clever libations and is a happy hour and brunch staple.

“I could go on and on; Tucson is packed with delicious restaurants. Tavolino Ristorante Italiano and Wild Garlic Grill in the Foothills are some of my favorites. Another is HiFalutin, and inside the Westin La Paloma Resort & Spa is Azul Restaurant. Not to mention all the Mexican food; there are just so many options here,” says Gigi.